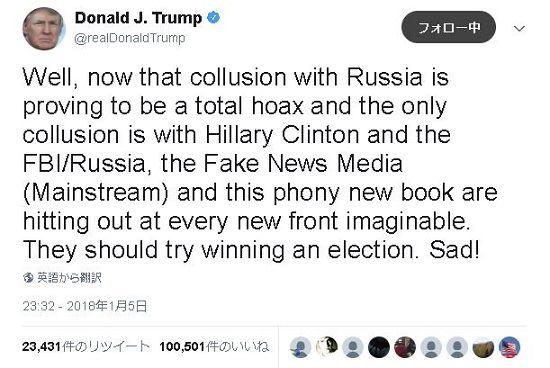 FBI has been investigating the Clinton Foundation for months
翻訳コンニャク

FBI has been investigating the Clinton Foundation for months

The FBI has been investigating the Clinton Foundation for months, reviving a probe that was dialed back during the 2016 campaign amid tensions between Justice Department prosecutors and FBI agents about the politically charged case, according to people familiar with the matter.

The inquiry resumed about a year ago. Agents are now trying to determine if any donations made to the foundation were linked to official acts when Hillary Clinton was secretary of state from 2009 to 2013, these people said. The people did not identify what specific donations or interactions agents are scrutinizing.

Word of the investigation comes at a particularly fraught time for the Justice Department and FBI, as it tries to navigate several polarizing issues, including an ongoing special-counsel probe of President Trump and his associates, as well as demands from Republicans in Congress that Clinton be reinvestigated on a host of issues. Among those is the foundation case.

On Friday, Senate Judiciary Chairman Charles E. Grassley (R-Iowa) asked the Justice Department to investigate whether a key figure in the special-counsel probe, a former British spy who authored a dossier of allegations, may have lied to the FBI.

Members of both parties have accused the FBI and the Justice Department of partisan bias in their probes of Clinton and Trump. The latter has been particularly vocal — both on the campaign trail and as president — about wanting the Justice Department to investigate Clinton, her allies and her family’s foundation. It was not immediately clear whether Trump’s rhetoric had any influence in spurring the FBI to resume its work, nor could it be determined whether that work began before or after he took office.

However, the probe’s existence already has led to accusations from Democrats that the Republican administration is pursuing old, dead cases to punish political enemies. A continued probe of Clinton could be viewed, particularly by Republicans, as the department being evenhanded in its approach to political cases.

Ron Hosko, a former assistant FBI director, said the bureau has been thrust into a “political minefield,” with pundits criticizing its every move.

“This is where big boys earn their pay, and this is where I think you put your nose to the grindstone,” Hosko said.

The Justice Department declined to comment. The Clinton Foundation inquiry was first reported by The Hill.

The Clinton Foundation probe dates to 2015, when FBI agents in Los Angeles, New York, Little Rock and Washington began looking at those who had made donations to the charity, based largely on news accounts, according to people familiar with the matter.

But in 2016, Justice Department prosecutors rejected a request from FBI agents to expand and intensify their work. They asked that the bureau not take any investigative steps that could become public, out of worry this could affect the impending election.

The investigation resumed after the election, with the FBI’s Little Rock office taking the lead, said one person familiar with the matter. Still, there was some skepticism inside the Justice Department that it would ever produce charges.

“It was never a great case, but it’s still being worked,” said one person familiar with the probe.

Republicans in particular have long raised concerns about what they viewed as corruption and conflicts of interest at the Clinton Foundation, in particular Clinton’s dealings with its donors while she was secretary of state. GOP lawmakers had called on Attorney General Jeff Sessions in July and September to explore various Clinton Foundation dealings, as well as other matters, by appointing a special counsel to look into Clinton-related issues. In November, the Justice Department wrote that Sessions would direct senior prosecutors to look into the cases about which they raised concerns and hinted that some might already be under investigation.

Assistant Attorney General Stephen E. Boyd wrote at the time that part of what the department would do was assess whether “any matters currently under investigation require further resources,” although he said his letter should not be construed as confirming or denying any probe.

By that time, according to the people familiar with the matter, agents already were investigating the Clinton Foundation.

The foundation inquiry is separate from the FBI’s high-profile investigation into Clinton’s use of a private email server while she was secretary of state, although Republicans have said that probe also needs to be reopened. The email investigation focused on whether Clinton or her aides mishandled classified information by using the private server. The FBI’s director at the time, James B. Comey, recommended in July 2016 that the case be closed without charges, and although work on it briefly resumed in October of that year — shortly before the presidential election — he ultimately did not change his mind, and the Justice Department endorsed his recommendation.

Justice Department officials have said senior prosecutors also are reviewing investigative records on the Clinton email case to see if any of the concerns raised by Republican lawmakers merit appointment of a special counsel for further investigation.

Word of the ongoing foundation probe came shortly after Rep. Mark Meadows (R-N.C.) and Rep. Jim Jordan (R-Ohio) suggested in a Washington Examiner column Thursday that it might be time for a new attorney general.

Trump has publicly toyed with removing Sessions, and he has repeatedly criticized the Justice Department and said his attorney general should look into Clinton and her allies, taking aim most recently at top Clinton aide Huma Abedin. On the campaign trail, Trump’s supporters frequently chanted “Lock her up!” at the mention of Clinton’s name, and the Republican candidate specifically called for the appointment of a special counsel to investigate the Clinton Foundation.

“Let’s call this what it is: A sham,” Clinton spokesman Nick Merrill said Friday in a statement. “This is a philanthropy that does life-changing work, which Republicans have tried to turn into a political football. It began with a long-debunked project spearheaded by [former Trump adviser] Steve Bannon during the presidential campaign. It continues with Jeff Sessions doing Trump’s bidding by heeding his calls to meddle with a department that is supposed to function independently. The goal is to distract from the indictments, guilty pleas, and accusations of treason from Trump’s own people at the expense of our justice system’s integrity. It’s disgraceful, and should be concerning to all Americans.”

The calls for a special counsel to investigate Clinton-related matters and the FBI have intensified on the right as a separate investigation, led by special counsel Robert S. Mueller III, explores whether the Trump campaign coordinated with the Kremlin to influence the 2016 election, and whether Trump might have tried to obstruct justice in that inquiry.

The Clinton Foundation has raised billions of dollars since it was formed and generally receives high marks from philanthropy watchdog organizations. But because of its global donor base and Clinton’s former position as the United States’ top diplomat, it also faced questions about contributions from countries such as Saudi Arabia, Qatar and Algeria.